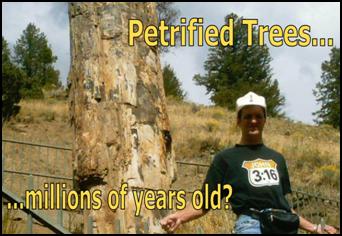 During a trip to Yellowstone National Park (2002), we saw petrified trees (left).  One may ask, “How can trees turn to stone?”  Does it take millions of years?  Interestingly, we don’t see the root systems attached to these trees.  Why?  Could it possibly be related to a catastrophe, with the trees not having grown where we find them?  The best explanation for petrified trees is the global flood that is described in the Bible. Trees would have been ripped up out of the ground at the beginning of the flood, then they would have floated around to be deposited somewhere later.  We see a small example of this today in Spirit Lake after millions of trees were blown down by the eruption of Mt. St. Helens (WA) in 1980 (below)! 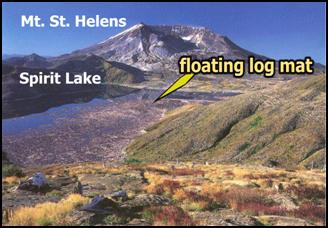 If petrified trees take “millions of years” to form…

...how could “polystrata” fossils form? (“Poly”=many and “strata”=layers)  We saw this portion of a tree trunk (below) near Charleston, WV (c. 2005).  This type of fossil is found world wide, extending through more than one rock layer. 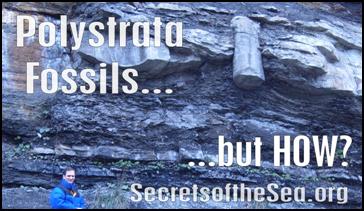 The importance of polystrata fossils cannot be overstated!  Nearly everyone knows the name “Jurassic” from the movie, Jurassic Park, some years ago.  This name is but one of many names (e.g.: “Cretaceous”) for sedimentary (laid down by water) rock layers that are found world wide.  These layers are said to be “millions of years” old, a time frame that cannot be confirmed by recorded history.  Instead, “millions of years” is a belief about rocks that doesn’t match up with evidence!

How long does it take for rocks to form? 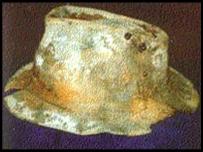 Consider a petrified teddy bear (left) or a petrified felt hat (right).  Are these things “millions of years” old?  Hardly!  I guess we need to believe that dinosaurs played with teddy bears or wore felt hats!

An interesting rock formation is the “teepee fountain” in Thermopolis, WY.  In 2011, we passed through Thermopolis to see this rock (below).  There is actually more than one. 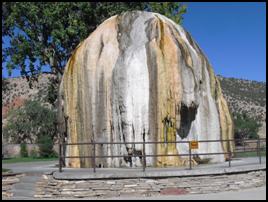 These flow stones are formed on pipes that were thrust into the ground in 1903.  Minerals in the boiling hot water came up from underground through the pipe, and in just over 100 years have built these massive rocks!

Around the world are evidences in stone that point to the Bible as being true.  Just as God used tablets of stone for the Ten Commandments (Exodus 24:12) and as He commanded Joshua to take up stones from the Jordan River (Joshua 4:3) as testimonies, so He uses rocks today as testaments to the flood of Noah’s day.  Fossils, rocks, and petrified trees aren’t evidences of “millions of years” of gradual processes.  Rather, they are evidences of the catastrophic world wide flood that is recorded in the Bible. For more on the flood, click here.

Genesis 7:11
“In the six hundredth year of Noah's life, in the second month, the seventeenth day of the month, the same day were all the fountains of the great deep broken up, and the windows of heaven were opened."

Why did the flood happen? Sin!

Genesis 6:5
“And God saw that the wickedness of man was great in the earth, and that every imagination of the thoughts of his heart was only evil continually.”

As the ark was an escape from the watery judgment in the time of Noah, so the work of Christ on the cross provides the “ark of safety” for us today from the punishment we all deserve for our sin.  Through faith in Him alone, we can receive complete forgiveness for our sins!

Romans 3:23
“For whosoever shall call upon the name of the LORD shall be saved.”