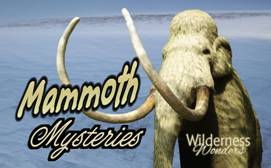 What is a mammoth?

Mammoths are large mammals of the elephant kind that are commonly equipped with long, curved tusks.  This group of mammals is called proboscidean from the word “proboscis” which means “a hollow organ or tube attached to the head, connected with the mouth, of various animals; a snout; a trunk” [1913 Webster].  The proboscideans include elephants, mastodons, and mammoths.  The Wikipedia article on proboscideans includes this statement:

“The earliest known proboscidean is Eritherium, followed by Phosphatherium, a small animal about the size of a fox.”

So, we are to believe that the elephant was once the size of a fox?  That’s one small elephant!

Mammoths and the Ice Age 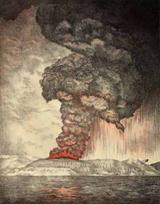 Mammoths preserved in places such as cold and snowy Siberia are excellent evidences of what happened during and after the Biblical flood.  World wide, the weather after the flood would have changed due to catastrophic factors on a different scale than today (unprecedented volcanic activity, earthquakes, geysers, and plate tectonics) that drastically changed the temperature of the oceans. These factors brought great changes to the weather world wide.  This has been observed.  Just one volcano in 1880 (the volcanic island of Krakatoa) affected temperatures globally.  Concerning Krakatoa, Wikipedia states:

“Average global temperatures fell by as much as 1.2 degrees Celsius in the year following the eruption. Weather patterns continued to be chaotic for years and temperatures did not return to normal until 1888.”

Imagine what volcanoes of this size, and larger, at numerous places on the globe would do to the weather world wide! 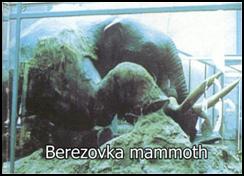 One interesting phenomena is the massive numbers of mammoths that have been found in the frozen mud of the Siberian peninsula, the most famous of which is the Berezovka mammoth.  It is intriguing to think of how such a large animal could be frozen in a “struggling” position.  For more details on this, such as how a “quick freeze” could freeze mammoths in motion, click here.

Are mammoths or the Ice Age mentioned in the Bible? 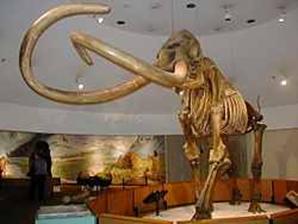 Neither elephants nor an “Ice Age” are mentioned in the Bible.  However, the earliest book of the Bible, Job, does mention snow and ice.  When we combine present-day evidence, historical data, and Biblical information, we arrive at hundreds of years of an “Ice Age” some time after the Flood.  In short, the great changes in the weather world wide resulted in continued catastrophes after the flood…even a quick burial of massive numbers of mammoths in the frozen tundra of Siberia due to drastic weather change, muddy bogs, and wind-blown sediment, or loess. 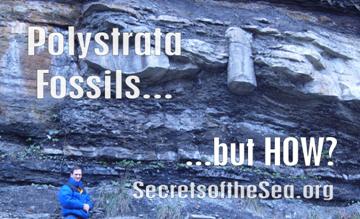 Evidences such as fossils, canyons, and rock layers fit perfectly with the Flood of the Bible.  Such an event would have left multitudes of evidences all over the earth.  For example, polystrata fossils (poly = “many” + strata = “layers”) are fossils that extend through more than one layer of earth.  The petrified tree portion (right), is best explained in light of a catastrophic, massive, and rapid burial rather than “millions of years” of gradual buildup of dirt, which is the usual explanation of the rock layers.

QUESTION:  how could a tree last for “millions of years” as it was slowly and gradually covered by dirt?  Polystrata fossils exist worldwide and are clear evidence to rapid burial, as would have happened during a great flood.  Yet, modern scientists are unable to accept this explanation.  Why?  God’s Word gives us a few clues: 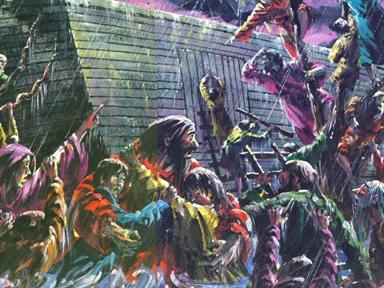 2 Peter 3:3-6
“Knowing this first, that there shall come in the last days scoffers, walking after their own lusts, and saying, ‘Where is the promise of his coming? for since the fathers fell asleep, all things continue as they were from the beginning of the creation.’ For this they willingly are ignorant of, that by the word of God the heavens were of old, and the earth standing out of the water and in the water: whereby the world that then was, being overflowed with water, perished:"

According to God’s Word, scoffers of the Bible in the “last days” are those who also are full of their own lusts and willingly ignorant, particularly concerning the water of the earth.  What a commentary for today! We see mankind full of selfish lusts, while modern, evolutionary scientists do not accept the great body of evidence that stares them in the face (fossils, canyons, rock layers, etc.), which speaks of a global, watery event!  They are willingly and willfully ignorant of the truth.  From the Biblical explanation, we know that they want to live life as they wish without a Creator telling them what to do!

The Flood:  a Message of Mercy

The Flood account is not only a message of God’s judgment on the sin of mankind, but also a message of mercy:  God spared Noah, his family, and the animals on an ark, a vessel which had only one entrance.  All on board the ark were delivered from God’s judgment.  In addition, God promised that He would never again destroy the earth with water … 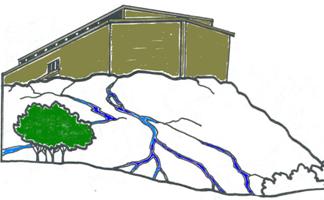 Genesis 9:14-15
“And it shall come to pass, when I bring a cloud over the earth, that the bow shall be seen in the cloud: And I will remember my covenant, which is between me and you and every living creature of all flesh; and the waters shall no more become a flood to destroy all flesh."

... and gave us evidence of this promise.  He set a “bow” (rainbow) in the sky as a visible reminder of his covenant (promise).  However, this promise doesn’t apply to future punishment by fire!

God, the Creator of all things, is in control of His creation.  When man sinned, He used His creation to bring judgment.  During the Flood, God provided an ark of safety; and for future deliverance, He still provides the “ark of safety” – His Son, Jesus Christ, Who died for our sins on the cross of Calvary.  In doing so, He took the punishment that each of us deserves!  Through faith in Him alone, one can become a child of the Creator and escape the fiery judgment to come!

John 1:12
"But as many as received him, to them gave He power to become the sons of God, even to them that believe on His name."