What is a bear? 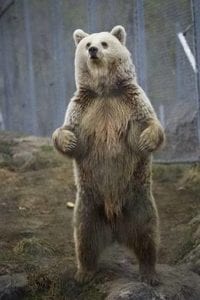 Bears are large, powerful mammals of the family, Ursidae.  Common characteristics include large bodies with stocky legs, long snouts, shaggy hair, and large paws with five non-retractile claws.  While the polar bear is mostly carnivorous and the giant panda feeds almost entirely on bamboo, the rest of the 8 species of known bears are omnivorous (“all eater”) which means that they eat almost anything.  Grizzlies can weigh up to 800 pounds while polar bears can weigh over 1300 pounds and can run up to 30 miles per hour!  Bears are found on the continents of North America, South America, Europe, and Asia. 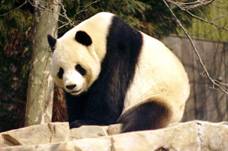 They have an enormous appetite as they build up fat storage for hibernation, or torpor, a deep sleep that lasts for up to five months.  It is during this time that some of creation’s most unique miracles occur.  During hibernation, the mother bear can have its baby and nurse it for up to five months.  During this time, they do not drink water nor do they “go to the bathroom”!  Where would the fluid come from that they need to give mild to their young?  The bear is fat when it starts hibernation, and each gram of fat gives off a gram and a half of water.  The water is recycled in the bear’s system to produce the milk and protein that that the baby bears need. 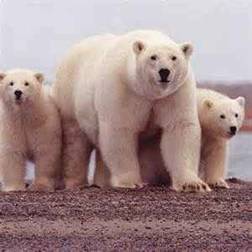 Another mystery of the bear during hibernation is how it can maintain its muscle mass for such a long period of time.  If a human is laid up in a bed for five months, the muscles would lose about 90% strength and would have to be built back up afterwards.  However, the bear somehow maintains its strength for five months.  Scientists who studied this with the use of sensors found that the bear periodically goes into violent chills, or muscle spasms.  This keeps it strong enough to forage for food or to defend its young right after hibernation.  If evolution is true, how did the first bear know how to do this?  The truth is that bears are unique in God’s creation.  There is absolutely no evidence that they “evolved” or that they are related to dogs.

The FACTS of the bear show that these creatures have unique features that no dog could of its own free will “evolve.”  Rather, bears are special animals that point to a Creator that has unlimited knowledge and ingenuity!

Are bears mentioned in the Bible? 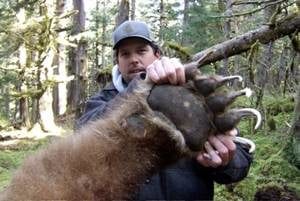 “And he went up from thence unto Bethel: and as he was going up by the way, there came forth little children out of the city, and mocked him, and said unto him, Go up, thou bald head; go up, thou bald head.  And he turned back, and looked on them, and cursed them in the name of the LORD. And there came forth two she bears out of the wood, and tare forty and two children of them.”
2 Kings 2:23, 24

One lesson from this passage is that young people should respect adults, particularly those who are serving the LORD.  God was not pleased with their mockery of His servant Elisha, and He used a couple of female bears as tools of punishment.  Today, we see a great deal of disrespect for adults among the young people of this generation.  While adults can be terrible examples and not all deserve respect, not one of us is perfect.  In fact, God tells us in His Word that we ALL have disrespected Him and disobeyed His perfect law: 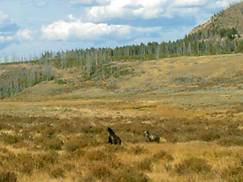 “For all have sinned and come short of the glory of God.”
Romans 3:23

That is the bad news, but here is the good news:
“For the wages of sin is death, but the gift of God is eternal life through Jesus Christ our LORD.”
Romans 6:23

And just how does one receive this gift?

“For whosoever shall call upon the name of the LORD shall be saved.”
Romans 10:13

Another Bible lesson from the bear:

“As a roaring lion, and a ranging bear; so is a wicked ruler over the poor people.”
Proverbs 28:15

The word translated “ranging” is the Hebrew shaqaq {shaw-kak'} and means “to run about” or “to rush back and forth.”  Just as an angry, pacing bear is a dangerous animal, so a wicked ruler is dangerous to the poor.  Isn’t it interesting that in our nation and around the world, we have seen leaders who claim to help the poor but who are dangerous dictators!  God compares these types of leaders to the dangerous bear!