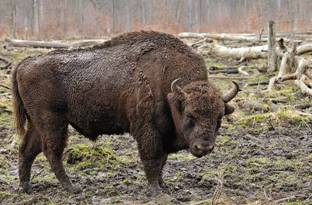 Bison (commonly called “buffalo”) are of the “bovine” family, or cattle.  Both the word “bison” and “buffalo” are similar in meaning.  “Bison” is from a Greek word which means “ox-like animal” while the word “buffalo” reportedly originated with French fur trappers who called these creatures “bœufs” which means ox or bullock.  The term “buffalo” dates back to 1635 in North America and the use of “bison” was first recorded in 1774. These creatures weigh up to 2200 lbs. and are actually the largest land mammal in North America! They usually appear peaceful or lazy, yet they can attack anything often without warning or reason.

Bison can run at speeds of up to 35 mph and cover long distances.  Due to their large size, they rarely are attacked by predators.  However, wolf packs can take down a bison and there has even been a recorded account of a single wolf taking down a bison! 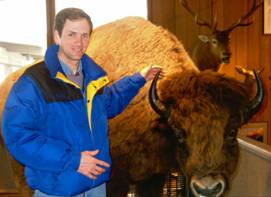 On Wikipedia, the “evolution” of the bison is stated as such:

“The bovine family (Taurids and Bisonids) diverged from the common ancestral line with Water Buffalo and African Buffalo about 5 to 10 million years ago.”

It is interesting that there is no mention on the Wikipedia page of a creature that supposedly was before the “bovine” (cow) created-kind (according to evolution).  This would be consistent with Biblical idea that God created each “kind” of animal.

Are bison in the Bible?

Genesis 1:24 “And God said, Let the earth bring forth the living creature after his kind, cattle, and creeping thing, and beast of the earth after his kind: and it was so.”

While the Bible doesn’t specifically refer to bison or buffalo, it does contain numerous references to cattle and the phrase “after his/their kind,” three times in one verse!  This brings up the question: 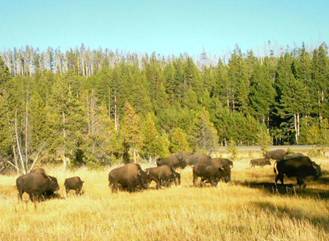 What is a created kind?

Though modern science doesn’t accept the Biblically-based “created kind” explanation of relationships between animals, the Wikipedia description of the “evolution” of bison even has them related to other “cattle” just as is consistent with Genesis 1:24!  The simplest definition for a “kind” is if they can (or could at some point in history) “bring forth.”

Genesis 1:24 “And God said, Let the earth bring forth the living creature after his kind…

Creationists would affirm the possibility, even likelihood, that some created kinds could lose genetic information (over thousands of years since creation and the flood) so that today they cannot “bring forth.”  However, this type of change is not proof of “molecule-to-man,” millions of years’ evolution.  It simply is a loss of information that is unlikely to be recovered.  For example, due to the loss of genetic information, the Chihuahua dog species cannot be genetically engineered back to a large species of dog such as a wolf.