What is a moose? 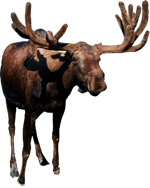 Moose (“elk” in Britain or “Eurasian elk” in 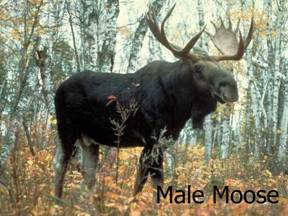 Europe) are the largest members of the deer family, distinguished by the large palmate antlers of the males.  They are mostly found in Canada, Alaska, Scandinavia, and Russia.  Their diet consists of vegetation from both land and water.  Unlike other species of deer, moose do not live in herds and are usually slow-moving.  However, they can become aggressive.  The word "moose" first entered English by 1606.  A mature male moose is referred to as a “bull” while a mature female moose is a “cow.”  An immature moose, either male or female, is referred to as a calf.  The size of an adult moose may reach nearly 7 feet at the shoulder, and the male can weigh up to 1500 pounds!

Are moose mentioned in the Bible? 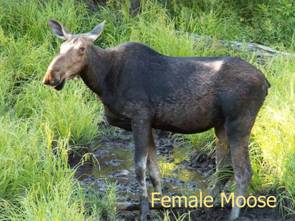 Not directly.  However, deer (moose being the largest species of deer) are mentioned.  Here are a few of those instances:

Deuteronomy 14:5 “The hart (an old, alternative word for “stag”) and the roebuck, and the fallow deer, and the wild goat…”

Psalm 42:1 As the hart panteth after the water brooks, so panteth my soul after thee, O God.

Isaiah 35:6 Then shall the lame man leap as an hart, and the tongue of the dumb sing…

As with the “cow kind” (bovine) including the bison (buffalo), the “deer kind” includes the moose.  This is but one of many illustrations of the fact that God created “kinds” of animals.  The key in determining the “kind relationship” between creatures is if they can “bring forth.” In other words, if they can “bring forth” (i.e., have offspring), they are of the same kind of animal.

Genesis 1:24 “And God said, Let the earth bring forth the living creature after his kind…

As God moved the psalmist to use the hart in expressing his desire for God (Psalm 42:1), may we also seek to learn, know, and rely on our Creator just as we seek and need water when we are thirsty. 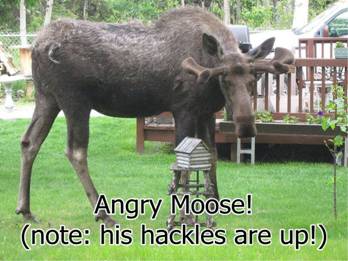