The BIG Deal About "Bigfoot" 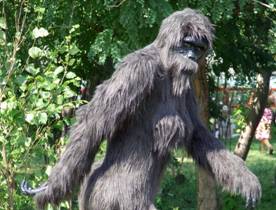 Could it be that a reclusive North American great ape (often nicknamed bigfoot) exists today?  To be clear, our goal in life is not to convince people that this creature exists.  However, in our travels around the country, we have met a number of individuals who have personally shared with us what they saw or experienced.  Two of such are pastors in our home area and two are ladies we met in UT (Check out this account from Geri).  Still another is an outdoorsman who lives in OR, who freely and openly shares a number of fascinating and scary encounters he has had!  All of these accounts indicate that something exists which fits the description of what is commonly called “bigfoot,” “sasquatch,” “skookum,” or “yeti.”  While some over the years have made up stories, in our opinion, there are far too many credible eyewitnesses to label all accounts as frauds or misidentifications.  Truthfully, the fakes certainly do not help the valid research into the truth about these creatures!

If indeed a bigfoot creature exists, what is it?

If such an animal exists, it is nothing more than the ape-kind, albeit rare, reclusive, and having a higher degree of known intelligence than most other creatures.  In addition, science has been unable as of yet to offer indisputable proof of its existence.  Consider that if a court of law relies upon eyewitnesses, should one not treat this subject the same?  The only structural difference between the known great apes and a “bigfoot” is that this creature allegedly walks upright. 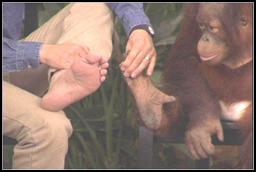 With evolution's claim of “millions of years” of earth history, man is thought to have evolved from a common ancestor with the ape/monkey-kind.  If and when indisputable evidence of a “bigfoot” is discovered someday, many who claim to believe evolution as a fact of science  would doubtless claim the creature to be “proof” of human/ape relation, and place it somewhere on the “tree of life.”  Yet, there is NO empirical (observable, testable) evidence for the idea of “monkey-to-man” evolution!  Instead, true science shows that man and ape are distinct creatures, but with a few external similarities.  However, similarity does NOT prove relationship! For example, an airplane and a fork are made of metal but this doesn’t mean they are related. Those who believe that man is related to the ape never seem to reveal the differences between humans and apes. 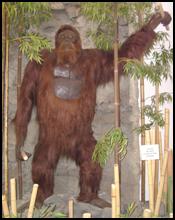 Here are a few:

Science has confirmed the existence of Gigantopithecus Blacki, an extinct great ape that lived at the same time as people, though evolutionists assume that it lived hundreds of thousands of years ago.
Over the years as we have touched on cryptozoology in our travels, we have met people who have told us what they saw or heard.  In our presentations, we share more detail as to what Carelene (UT), Johnny (NC), and Mike (NC) have seen and heard.  However, before we get to the anecdotal and video evidence, let us lay some “groundwork.” 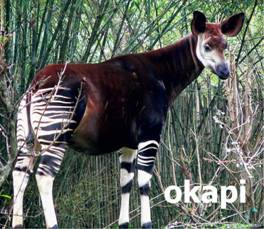 The subject of “bigfoot” is but one topic in cryptozoology, the “the study of hidden living things.”
crypto is from the Greek, KRUPTOS, meaning “hidden” or “concealed”
-zo is from the Greek word ZO-ON, meaning “living” (“zoo” comes from this word)
-ology is also from a Greek word LOGOS, and means “logic”)
Put together, the components of the word indicate a “logical study of hidden living things.”

What are other examples of “cryptozoology”?

The subject of “bigfoot” is just one of many creatures in this study.  Though some dismiss cryptozoology as “pseudoscience,” we must remember creatures like the okapi to realize that this science is valid.  The okapi was thought to be extinct but was found alive in the Congo of Africa!  With findings like this, we are inclined to accept the possibility of other unknown creatures being alive today, such as the emela-ntouka or mbielu-mbielu.

And what about the possibility of dinosaurs being alive in the Congo too?  Other creatures, called “cryptids,” in this study include, but are not limited to:  the mountain gorilla, komodo dragon, giant squid, and the Spot-bellied Eagle-Owl. There are basically three categories in cryptozoology: 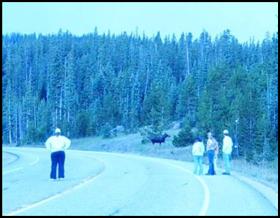 A number of years ago, we were traveling through Walden, CO when we saw a large animal cross the road ahead of us.  We stopped to get a picture of it, but it was standing in the woods as still as a statue, looking my direction.  Since it was a female, I wasn’t about to approach it by myself.  So, when a vanload of folk came by, I let them know that I was looking at a moose.  After they stopped and got out of the van, they shooed her back across the road, and I was able to get this picture before she disappeared back into the woods (right).  Why do I share this? 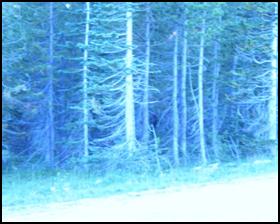 Sometimes, we need to remind ourselves that animals live in the woods and know their "home."  We drive noisy vehicles on paved roads, live in our neighborhoods of houses, and work in our polluting cities and towns…often without ever getting out in the woods for any length of time to just listen and observe God’s handiwork. Many times, the animals have senses that humans don’t have, or the same senses are far more sensitive than ours.  That moose was standing as still as a statue looking at me, since I was an intruder into her ‘house’ that could be a danger to her or (possibly) her baby.  She happened to cross the road just before we came through.  Otherwise, we would have never seen her.  Apply this to a “bigfoot,” and you have this thought:  If such a creature has a greater degree of intelligence than a deer or moose, it may be able to avoid detection by humans.

Can humans live in the woods?

The Boston Marathon bombing reminded us of other tragedies like the 1996 bombing during the Olympics in Atlanta, GA.  At the time, we were working at a church in TN and sometimes would get away to a cabin on Lake Santeetlah in the mountains outside of Robbinsville, NC.  At the time when Eric Rudolph (the bomber) was on the loose, we joked to ourselves about him ‘probably being out there in the woods.’  Well, he certainly was!  Though authorities used every means available, including dogs, Rudolph was able to hide out in the woods for 5 years (doubtless with some help) and never was “found.”  He was “caught” as a loiterer when he came down early one morning into the nearby town of Murphy.

QUESTION:  If this man could hide in the woods that long without being found, what about an unknown animal that lives there?

With our travels in creation ministry since 2000 and having studied creation science since the 90’s, I have come to four main reasons why those who believe in a Creator should study cryptozoology and share its message:

What is the evidence?

With our travels in creation ministry and studies of creation since the late 90’s, we’ve been privileged to encounter a few folk who allege that a “bigfoot” exists.  Here are a few of the most intriguing accounts:

Some years ago, we met Carelene at a fair in Payson, UT who freely shared with us her encounter:

“In the spring of 2001, I was walking in the swamp by Thompsonville, MI.  My neighbor… had told me earlier of their belief that Big Foot was a local resident but I didn’t give it much thought….  It was early morning, the snow had thawed and the ground was soft but there was no one around…  I was surprised by the sound of something moving through the trees, and I looked expecting to see one of the deer that often join my morning walks.  Instead I saw the form of a very tall man running quite fast through dense underbrush and swampland. He was covered in white fur.  I sat there and watched him for about a minute, stunned.  I couldn’t believe my eyes and wasn’t ready to admit that it was, in fact, Bigfoot that I saw until two days later when I came across his footprint in the same vicinity. It was a clear print in the mud across the track.  I located signs of two other prints though not quite as clear.  I could see that his stride was at least twice that of a man.  I took a picture of it but it was not a deep enough print for a casting. I was able to show the print to a few friends, but eventually it weathered away.  The footprint was approximately 14 to 18 inches long.”

This year (2013), we met Mike Greene of Salisbury, NC who has seen an intriguing creature and actually filmed it.  In April of 2013, Mike took me (Jeff) to where he shot the thermal video (left), and I videoed his description of what he experienced during his first trip to the Uwharrie National Forest.  For more on the work of Mike Greene, click here.

On our trip to the Uwharrie this year, I was able to video Mike describing one of his experiences (below).

Yet another recent opportunity was to meet Pastor Johnny Tomlin who pastors Pilgrim Missionary Baptist in Hickory, NC.  He came to one of our Creation Fellowships and shared with us what he, his wife, and her uncle saw in 1975 (below).

Is the ape-kind mentioned in the Bible?

There are only two places where apes are mentioned in the Bible:

2 Chronicles 9:40
“For the king's ships went to Tarshish with the servants of Huram: every three years once came the ships of Tarshish bringing gold, and silver, ivory, and apes, and peacocks"

Most importantly, the idea that humans are related to the ape is a belief that

1 Corinthians 15:39
“All flesh is not the same flesh: but there is one kind of flesh of men, another flesh of beasts, another of fishes, and another of birds.”

Since man was made in God’s image and in a perfect environment, the question then is:  What happened to the world?  Why does evil exist?
The answer:  sin.

Romans 3:23
“For all have sinned and come short of the glory of God.”

Our problem is a sin problem which demands full punishment. But the solution is the Savior, the LORD Jesus Christ Who paid our punishment on the cross of Calvary.  The Creator stepped into His creation to take our place so that we can receive a full pardon! We can be completely forgiven if we place our faith in Christ alone.

Romans 3:23
“For whosoever shall call upon the name of the LORD shall be saved.”