The Cause of Creation

Lifting Up the Serpent - Setzer
Most people dislike creepy animals such as snakes! But this is one of God’s animals! Does this most-despised animal have a special place in God’s Word? Come and see! This message gives both the scientific and Scriptural implications of a special creature that God used for an awesome purpose: to proclaim His message to the world! This animal that Satan no doubt thought to be his own, God elevated to a special place, leading up to the most familiar Gospel verse in the Bible!
Dinosaurs Alive?! - Setzer
Job 40:15 “Behold now, behemoth, which I made with thee.”
Macro-evolution requires “millions of years” to take place. But what if this time frame is totally disproven not only by true science, but also by intriguing evidence that dinosaurs are still alive? This idea flies in the face of evolution and is an excellent topic to use in pointing others to a Creator! Join us in hearing about Mokele-Mbembe – an alleged living sauropod dinosaur in the Congo! (Special guest: Kam Badibu, native of the African Congo)

What Mean These Bones?

The Gospel of Evidences - Setzer

How important to God are physical evidences, and does the Gospel involve evidence? A look at 1 Corinthians 15 will stir the hearer to see God’s handiwork in a different light and to use it as a tool for both edification of believers and evangelism of unbelievers!
Monkey Business - Setzer
What do apes, Adolph Hitler, and the Aborigines have in common? This sobering, politically incorrect session is sure to affect both believers and unbelievers alike as the negative impact of macro-evolution is clearly shown to be what it is: a life-threatening and devastating world view that so often is taught to young people as fact. However, its ultimate implications are being ignored and suppressed in America and around the world.

Thursday:
Dinosaurs Alive!? – Jeff Setzer
If dinosaurs died out long before man appeared on earth, why are there credible reports from the Congo of a dinosaur-like creature that has a long neck and tail?  In this presentation, Jeff presents intriguing evidence that points to the distinct possibility that sauropod dinosaurs still exist today!

The Cause of Creation – Jeff Setzer *
Why the conflict between creation and evolution?  This session shares nine points that clarify why Biblical creationism is critical to Christianity, the Gospel, and to our culture as a whole.

Dinosaurs to Doubt: The Rise of Atheism in the 21st Century – Steve Lawwell *
The newest and most important presentation by Echoes of Eden, this message is intended to be a wake-up call to America.This presentation reveals what is causing the rapid decline of the American church, the rise of atheism, and what Bible believers can do to stop the erosion of American Christianity.

Friday:
Pterosaurs Alive!?  – Jeff Setzer
If the evolutionary idea that dinosaurs died out “millions of years” before man  appeared on earth is true, why are there credible reports in different parts of the world of intriguing flying creatures that look like pterodactyls?  In this session, Jeff       presents intriguing evidence that “flying dragons” (pterosaurs) are alive!

Roar to Soar—Are Dinosaurs & Birds Related? – Steve Lawwell *
Evolutionists tell us that dinosaurs exist today…as birds!  Could this be true?  In this presentation. Steve gives aanalysis of the “dino-to-bird” evolutionary hypothesis.

Dinosaurs & the Worship of “Millions of Years” – Ken Sheets *
When scientists speak of fossils or dinosaurs, we so often hear the time frame “millions of years.”  One must wonder WHY they frequently speak of these ages when they cannot possibly KNOW what took place over such eons of time. Is this time frame truly scientific, or just a strong religious belief that hinders true science?

Saturday:
Creation: The What, the Why, and the How – Dr. Jobe Martin *
WHAT do you really believe, WHY do you believe it, and HOW do you defend it?
This session presents basic tenants of Biblical creationism that will help one to defend the creation worldview (I Peter 3:15).

Creation:  From Dinosaurs to Dung Beetles – Dr. Jobe Martin *
In this session, Dr. Martin shares unique features of the artistry and design in every created creature...design which points to a Designer.  What do we REALLY know about dinosaurs?  What is so amazing about dung beetles?

The Age of the Earth:  Thousands...Not Billions – Lawwell *
How old is the earth, anyway?  In this session, Steve presents a fast-paced look at several topics related to the age of the earth, including radiometric dating, the geologic column, and un-fossilized dinosaur bones.

Noah’s Ark: Silencing the Critics – Lawwell *
In this presentation, Steve shares Biblical and scientific responses to three of the most popular criticisms that skeptics level at the Flood and Noah’s Ark:  the inadequate size of the Ark, the difficulty of caring for the animals, and the survival of the Ark in the turbulent floodwaters.

Dinosaurs in Human History – Sheets *
We certainly do not see dinosaurs roaming the earth today.  However, does this mean that they did not exist at the same time as people?  Is there any evidence that these creatures are mentioned in history?

Lifting Up The Serpent – Setzer
Most people dislike snakes!  But does this despised animal have a special place in the Bible?  This session shares both scientific and Scriptural implications concerning this creature, an animal that God used to proclaim a special message! 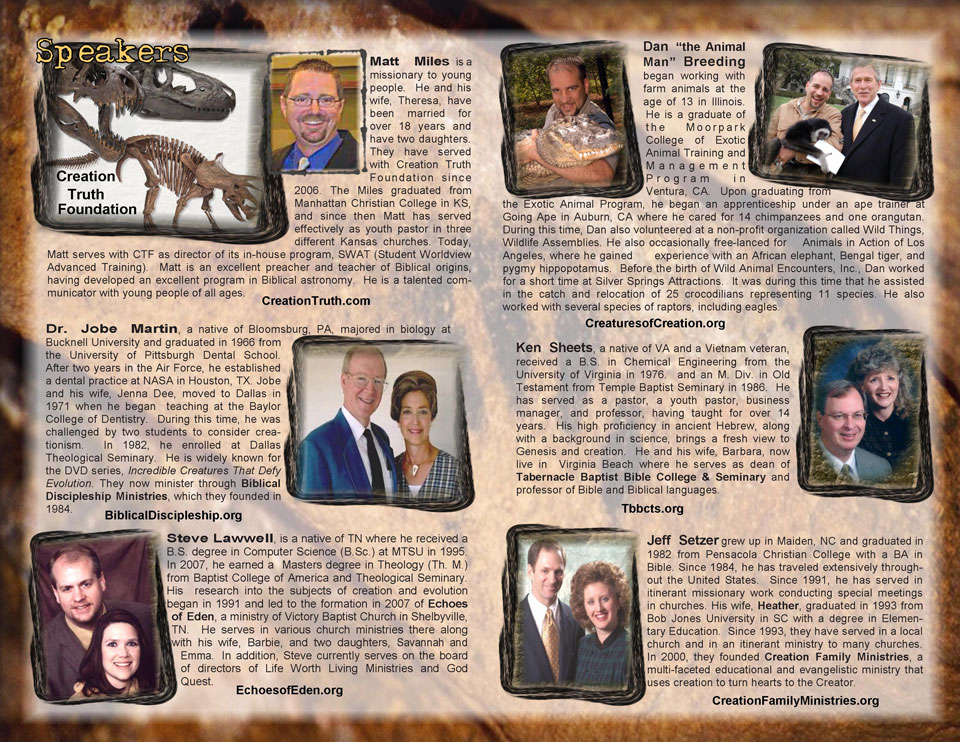