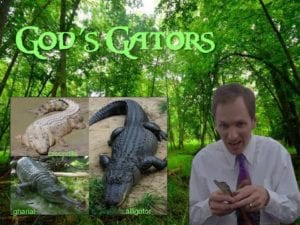 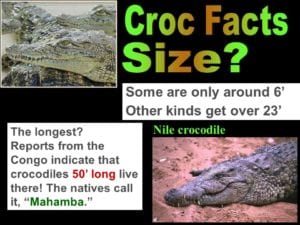 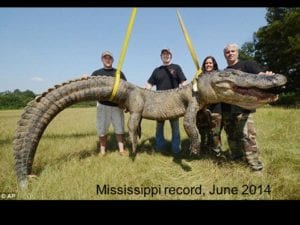 Crocodiles and alligators are part of a larger and fearsome group of reptiles called “crocodilians.” Crocodiles are more aggressive than alligators, and therefore more dangerous to people. So how can we tell the difference between them?

1. Shape of snout Alligators have a more rounded snout, while a crocodile’s is more narrow and pointed.

2. Position of the teeth The teeth of alligators fit inside the mouth, but a crocodile’s teeth are designed so that the bottom teeth show outside of the jaw.

3. Position and shape of the eyesAn alligator’s eyes sit higher on the head, and are “frog-like” in appearance, while a crocodile’s eyes are set lower on the skull and are elliptical or “cat-like.”

4. Coloring Alligators are darker in color while crocodiles are generally lighter 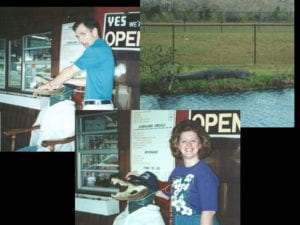 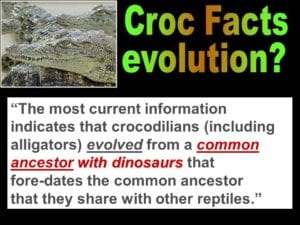 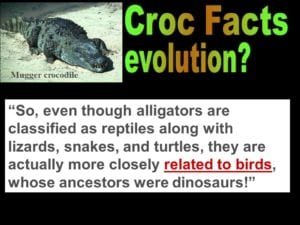 How could this fearsome reptile be related to a bird?

Some examples of this idea: 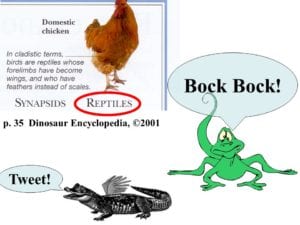 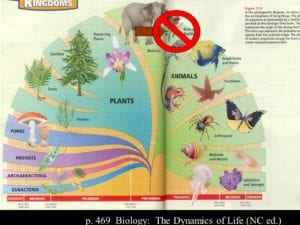 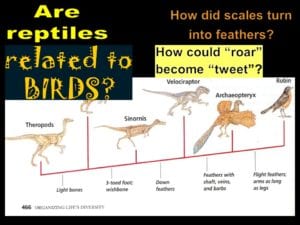 When we look up “crocodilian” in Wikipedia, the first sentence states:

“The Crocodilia (or Crocodylia) are an order of large, predatory, semiaquaatic reptiles. They appeared 83.5 million years ago in the Late Cretaceous period and are the closest living relatives of birds, as the two groups are the only known survivors of the Archosauria.”

QUESTION: How can they know this relationship? Were those who claim the reptilian relation to birds there to see the many long and slow changes that took place as reptile turned into bird?

What is the truth?

The FACT is that birds are FAR too different from reptiles to be related. In fact, an article from June 9, 2009 on Science News stated: 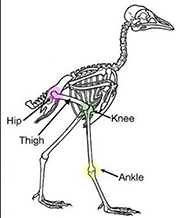 ...It’s been known for decades that the femur, or thigh bone in birds is largely fixed and makes birds into "knee runners," unlike virtually all other land animals, the OSU experts say. What was just discovered, however, is that it's this fixed position of bird airbird bones…keeps their air--sac lung from collapsing when inhaleswhen the bird inhales.

QUESTION: How could a reptile decide one day that it wants to fly? If that actually happened, how then could it begin changing the design of its breathing? As the illustration shows, a bird’s thigh bone supports the lung to prevent collapsing! At least some evolutionists in Oregon back in 2009 recognized at least one major difference between birds and reptiles, and there are many more differences! While they termed it “unlikely,” we say it is a bit more like impossible! Maybe God designed birds special as their own kind?

1 Corinthians 15:39 All flesh is not the same flesh: but there is one kind of flesh of men, another flesh of beasts, another of fishes, and another of birds.

Because of this belief that birds and reptiles are related, some even think that scientists can turn them back into dinosaurs! 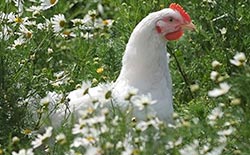 “Hans Larsson believes that by flipping certain genetic levers during a chicken embryo's development, he can reproduce the dinosaur anatomy. Hans Larsson, the Canada Research Chair in Macro Evolution at McGill University in Montreal, said he aims to develop dinosaur traits that disappeared millions of years ago in birds.

Because of this belief, it is thought that alligators and birds are related. However, the myriad of differences prevent this idea from even being considered science. Nevertheless, the reptile-to-bird idea is presented as a fact, even in a children’s activity book we happened to find once in a Dollar General store in our home town. Why would the youngest of children would be taught a fairy tale as a fact of science?? 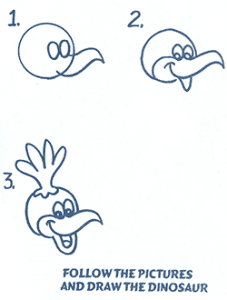 What about the complex design for flight and the section of the brain to control it?

How could reptilian scales turn into delicate feathers?

What about the great variety in birds… from ostriches to hummingbirds?

HOW reptiles develop abilities certain birds have to navigate over great stretches of ocean? 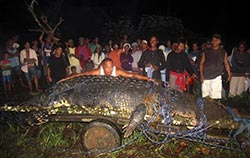 These and many more questions cannot be answered simply by this un-scientific belief!

What about a massively HUGE crocodile? This more than 20 feet long croc (now dead) was captured on the island of Mindanao and was nicknamed “Lolong.” For more on this creature, click here. 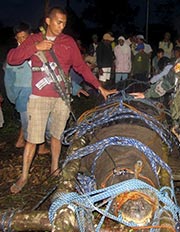 Does the Bible mention a HUGE reptile? Yes! In Job 41, God describes in great detail a fearsome reptile called “leviathan”:

Canst thou draw out leviathan with an hook? or his tongue with a cord which thou lettest down? Canst thou put an hook into his nose? or bore his jaw through with a thorn? Will he make many supplications unto thee? will he speak soft words unto thee? — Canst thou fill his skin with barbed irons? or his head with fish spears? Lay thine hand upon him, remember the battle, do no more. 9 Behold, the hope of him is in vain: shall not one be cast down even at the sight of him? 10 None is so fierce that dare stir him up: who then is able to stand before me? (Job 41:1-3; 7-11)

In this passage, GOD Himself used an unknown, fearsome reptile to communicate to Job the need to fear Him. Which is greater, the fearsome reptile or the Creator of the reptile? Have you submitted your will to the One Who made you? Do you live your life in awe of your Maker, the One Who not only made you but paid the price for our redemption from sin? For more information on this, email us at creationfamin@yahoo.com.