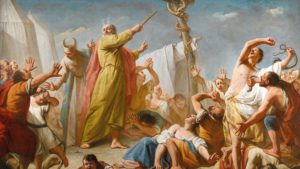 “…whoso breaketh an hedge, a serpent shall bite him.” (Ecclesiastes 10:8)

Recently, I stopped by to see a friend from our former church.  In our conversation, as I was sharing our experiences, I mentioned the name of one of the individuals directly involved in pushing us out.  When I said the name, he unexpectedly exclaimed, “He’s a snake!” While I had learned that through my experiences, his response was quite interesting and is the thought behind this blog post!

Since 2000, Heather and I have been privileged to serve our LORD in the field of creation and apologetics, bringing people to the authority of Scripture.  However, folk often misunderstand or misconstrue what the issue is all about. Creation teaching is not just for a classroom.  It is the bedrock foundation of a Biblical worldview.

“In the beginning, God created the heaven and the earth.” (Genesis 1:1)

This Record from the Creator is the foundation for everything.  It presents the initial concept that there is a God and that He is Creator of all and Authority over all.  When we take this beginning precept and “plug it in” to everyday life, questions of life are answered, such as: “How does this affect my life?” or “What is God’s design for me?”

In the same way that God used creation to begin His Word, so the concept of God’s design should be the foundation as we “build” our thinking concerning anything.  Whatever the subject or issue may be…music, animals, dating & marriage, politics, current events, health…  Biblical creation is like eyeglasses that clear up “fuzzy” thinking, or like a GPS that helps us find our way.  In short, it’s not just a “Genesis subject,” but a truth that courses throughout Scripture like blood flowing through our veins.

“Remember now thy Creator in the days of thy youth…”  (Ecclestiastes 12:1)

Solomon, the author of Ecclesiastes, was the wisest man that ever lived (apart from Christ).  Though he was very wise and God used him to write most of the Proverbs, his God-given wisdom did not prevent him from making un-wise decisions.  Toward the end of his life, he recognized the critical need for young people to recognize the ultimate Authority, their Creator.

Of all of God’s creatures, the snake is perhaps the most feared and hated of all!  This possibly is related to the fact that Scripture refers to Satan as that “old Serpent,” who utilized the serpent to orchestrate the Fall of man.  But the snake is still one of God’s creatures and it should make us think of its Maker.  Christ Himself used this animal when speaking with Nicodemus, and we read in Proverbs 30 that Agur considered the “way of a serpent upon a rock” and thought it “too wonderful.”  Could it be that we despise a creature that GOD described as “too wonderful“?

In Numbers chapter 21 we read an account of God’s judgment on His people, Israel, in which He used fiery (venemous) snakes.  He instructed Moses to make a serpent of brass and to place it upon a pole.  All the infected people needed to do to be healed of the venomous bite was to look at the brazen figure! Jesus referred to this account just before the most familiar Gospel verse in all of Scripture (John 3:16):

Embodied in this verse is the message of creation, God’s purpose for His animals!  They carry HIS MESSAGE!  Like the donkey that Jesus rode into Jerusalem or the star that led the wise men, God uses His creation to proclaim HIMSELF!   Jesus took this lowest and most despised creature–as He Himself would be despised and rejected of men–and elevated it to a status higher than any other animal, that of inclusion in the most familiar Gospel passage of all Scripture!  The same creature that Satan thought to have used solely for his own purposes as he perpetrated man’s downfall, Christ elevated to the privileged position of a Biblical illustration of Himself on the cross!

When I contemplate this, I’m amazed and thoroughly blessed to know that such a low, despised, rebellious creature as I could have been “lifted up” as a child of God when I was only 8 years old.  Oh, what infinite love and compassion! He even used the lowliest of creature as His illustration!  The “serpent upon a rock”….  Jesus is called the “Cornerstone” (1 Peter 2:6, 7). Hmmm… I’m with Agur in Proverbs 30.  I think it’s too wonderful too!

However, not all are willing to make this Biblical connection.  Not everyone, including preachers, will acknowledge what Jesus plainly said and continue to malign this most intriguing of God’s creatures!

The year was perhaps 2014. We were blessed to conduct a “Jungle Tales” VBS at Faith Baptist in Lancaster, SC where Gerald Eaves is pastor. Brother Eaves had been able to schedule “Dan the Animal Man” for the closing program night.  And as it happened, Heather and I both lost our voices that week and the church folk had graciously stepped in.  When it came to the last night, Dan was certainly a welcome help!  We had given out awards and I was barely able to share the message before Dan took over while I made TONS of balloon swords for the great number of kids we had that night!  During the animal presentation, Dan referred to a “gift” he’d brought for us which was sitting just outside! It was a 6′ jungle carpet python!

We quickly dubbed it “Jake the Snake” and welcomed the challenge of making a spot for it in our rig which at the time was our home full time.  Since we received the snake at the end of the summer, we were able to set it up for the remaining VBS meetings we had before returning to our home church for the rest of the year.  The next February, we had conferences planned at Tabernacle Baptist in Virginia Beach, VA and Tabernacle Baptist in Hickory, NC utilizing Matt Miles and the marvelous museum ministry of Creation Truth Foundation!

After both conferences were over and we were recovering from the “busyness” of the time, we attended our home church on a Sunday evening.  The pastor just ‘happened’ to preach a message from Acts 28 about the apostle Paul when a viper bit him!  During the message, in some elaborated “sideline comments,” he said, “…in fact, anyone who likes snakes there’s something wrong with them”!  We’d JUST had “Jake the Snake” set up in the front of that same auditorium!  Hmmm.  The statements he made stood out in my mind, and the next morning I posted this on Facebook:

I am thankful for the serpent and for the awesome messages that God has invested in this creature. John 3:14 “And as Moses lifted up the serpent in the wilderness, even so must the Son of Man be lifted up.” Not only does the serpent remind us of the worst day in world history–when sin entered into the world (Genesis 3; Romans 5:12) and Satan was allowed by God to use it to instigate man’s rebellion against Him–but it also reminds us that we are on the winning side! (Revelation 20:2 “And he laid hold on the dragon, that old serpent, which is the Devil, and Satan, and bound him a thousand years.”) The ‘Proverbist’ put it this way, “There be three things which are too wonderful for me…the way of a serpent upon a rock…” Those who continue to malign this animal, when God in His grand design clearly “lifted it up” to a status higher than any other creature (being in the most familiar Gospel passage and representing Himself on the cross) do not know God as He has revealed Himself in His Word! The LORD Who created this creature, which Satan used to bring man’s downfall, has lifted it up! Ps 40:2 “…he brought me up also out of the horrible pit, out of the miry clay and set my feet upon a rock.” I am thankful that in June of 1973, He lifted this ol’ bitey, venomous ‘serpent’ and set him on the Rock, the LORD Jesus, the Rock of my salvation (Ps 18:2)! I’m with the Proverbist–the serpent is “too wonderful”!

Well, the post hit a nerve and “serpents” bit!  One of his followers began privately messaging me about it, seeking to call me into account by expressing her thought that my post was “disrespectful” of the pastor.  I admit that I clearly don’t know the background activity, but she certainly seemed like an informant!  Hence, like an errant schoolboy, I was called into the ‘principal’s’ office to give an account of my post.  This occasion was one of the most egregious examples that revealed to me that this pastor was a lording individual who seeks to quash anything that goes against him or his ideology.  The crux of the matter was this portion of my post: “Those who continue to malign this animal…do not know God…”!  That really got his dander up!  At one point in our long meeting about the post, Hooks said that “God appointed me to be the pastor of this church”!

Let’s think about this for a moment.  God appointed a fallible man to be an “undershepherd” authority over other fallible people, a term that is nowhere found in Scripture!  What did these words mean?  Is this all comparable to the Catholic system of popes, cardinals, and priests, or a similar Mormon hierarchy?  Did the Creator of all things communicate such a design of authority structure in His Word, a system that supposedly has “pastoral authority” at the ‘top’ of a local church pyramid?  I began to research more, and this booklet was the end result of my studies.  After I printed the booklet, I found this article about the idea that angels in Revelation 2-3 were the “pastors” of the churches of Asia.  In short, they were indeed mighty heavenly messengers just as the King James translators indicated.  If they were human messengers, the translators would have translated the more accurate “pastor” or “elder.”  As a result of my studies, it became clear that pastors can very easily see themselves as “appointed” by God as an “angel” of a particular assembly, a local church.  This is in direct contrast to God’s instructions to elders to “Neither as being lords over God’s heritage” (1 Peter 5:3) and even to Jesus’ example of servitude when he washed the feet of His disciples.  The Greek verb for “being lords over” is KATA-KURI-OO-OH which is the same word that Christ used in Matthew and Mark’s account of His response to the argument among His disciples:

“But Jesus called them to him, and saith unto them, Ye know that they which are accounted to rule over the Gentiles exercise lordship over them; and their great ones exercise authority upon them.But so shall it not be among you: but whosoever will be great among you, shall be your minister: And whosoever of you will be the chiefest, shall be servant of all.” (Mk. 10:42-44)

In all three of the Synoptic Gospels (Matthew, Mark, Luke), the LORD Jesus Christ (the Head of His church) stated that “lordship” and “exercising authority over” others would NOT be among His followers.  Yet, it does exist in a great way today, under the terms of “undershepherd” and “pastoral authority.”  Even the constitution of our former church expresses such hierarchy:

In short, the church constitution places the pastor as the sole “head” of God’s assembly there, in control pretty much of everything!

I looked up the word “hedge” in my Bibleworks software and found that it means a “fence” or a “wall.” In essence, over time through my communications with the pastor and deacons, I learned the hard way that one can easily get into trouble by challenging the “walls” of church tradition and hierarchical thinking.  Beware!  The “snakes” will BITE!