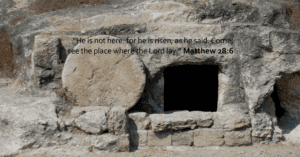 Are the three “points” to the Gospel the death, burial, and resurrection of Jesus Christ?  Over the years, I have often heard these three truths spoken of as the Gospel without connecting verses 3 & 4 to the succeeding verses.  Specifically, the very next verse (v. 5) begins with another “that” phrase:  “and that He was seen.” In short, there actually are five points to the Gospel:

While this “5-point view” may sound heretical, we must of necessity look at the context of the passage and compare Scripture with Scripture.  Many a false or incomplete doctrine is possible when a word, phrase, verse, or more is taken out of context and used independent of other truths and texts of God’s Word.

First, if Jesus were not the Creator, He could not have risen from the dead.  While this point isn’t mentioned here in Paul’s first letter to the Corinthians, this truth is clearly taught in other passages like John 1:1-14 and Colossians 1:14-18.  None of the rest is possible without this fact.

Second, Christ’s death on the cross is predicated on His entrance into humanity as a baby in the womb of the virgin, Mary.  If He had not been born, He could not have died.

Fourth, the capstone of Christianity is the resurrection, that Christ came back to life!  He, the Author of life, has power to lay down His life and to take it up again (John 10:15-18).

Fifth, as the passage states, Paul continued with another “that”:  “that He was seen…”  What lasting value would the resurrection have without the evidence, and that the evidence be confirmed by MANY?  The Creator in flesh saw fit, not only to stay around for 40 days after His resurrection (Acts 1:3) showing Himself alive, but also to have the apostle Paul recount individuals and groups who saw the risen LORD Jesus Christ!

This Resurrection Day, and every day, let us recognize and take to heart the evidences that God has provided for our eternal blessing and benefit!  The Gospel of Evidences must needs be shared with everyone, that Christ died for our sins and rose again…and that there are a myriad of evidences!