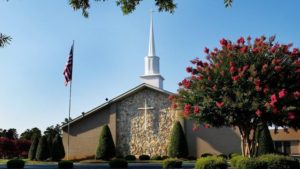 This has been a long time in coming!  Through this series of Telltale posts, it is NOT my intention to seek revenge against any individuals or our former church, or even to vent frustration about negative situations.  God said “Vengeance is Mine…” (Romans 12:19).  Most people follow an accepted practice of quietly leaving a church or ministry without “making waves” or saying anything.  Saying nothing would be the easy thing to do.  When nothing is said, underlying and important issues are never dealt with!  While I venture to say that many will never see these posts, I nonetheless wish to document what has taken place.  Why?  Romans 8:28 coupled with Alexander the Coppersmith (2 Tim. 4:14-16) and Diotrephes (3 Joh 1:9-11).  God gave us these situations and I have come to desire to use them for HIM!

Through all of the challenges with people at our former church family, namely the pastor, we can say that we’re VERY thankful and blessed that that LORD has opened and continues to open our eyes.  Most of all from studying a number of Scriptures, we have learned details of the design that the Creator has for His people and how they should function as an assembly, in contrast to how most groups of believers operate with a hierarchy that includes a “board” of deacons, a CEO (pastor), and other aspects that clearly show that they function as a business.  The confidence that Bible knowledge has given us has brought us to the point that we now have less and less fear of man when it comes to sharing Bible truth about His church.  In addition, through years of both good and bad experiences at home and in meetings, Heather and I have learned (and are learning) to be extremely grateful for all that the LORD brings our way!

By placing these “adventures” in writing…

1. It is one way of “moving on” to put 8+ years of a negative home church situation behind us, a church that served as both home and ministry base for more than 20 years as our ministry began and grew.  It was all the more difficult to leave the place where I had attended high school from 7th – 12th grades, where my Christian growth began…especially with the annual school camps at the Wilds Christian Camp where I dedicated my life to the LORD.  It is the place where Heather and I met, when her mom dragged her up to me and said, “My daughter knows all the Bible Time songs!  She can play for you this week!”  Seven weeks after engagement, we were married at that church in 1993, the ceremony conducted by the former pastor, Pastor Phil Vos, along with Heather’s dad.  It is the place where we conducted our first creation conference, that happened to take place the night of Pastor Vos’ memorial service.  In short, we have quite a bit of history with this church and it was extremely difficult for us to leave after nearly 20 years of serving as missionaries based out of Tabernacle.

2. Most importantly, it is our way of helping anyone who desires Biblical truth–to know the Scriptures and to be warned of overbearing, “lording” pastors or other self-assertive individuals, a leadership–rather lordership–that commonly exists in the modern church hierarchical structure which places a fallible man “over” God’s “heritage,” an arrangement that is clearly warned against (1 Peter 5:3).

When I finish, this post will be the longest and final blog post in this series, for I plan to share the documenting evidence.  First, I am sharing a link (below) to the letter that I wrote to church leadership in response to their request to meet with me regarding what we believe about a pastor.  (Since this writing is about 4 years after the fact, my recollection is that no one ever even acknowledged receipt of the letter and neither was it brought up for discussion.)  Due to the telltale, about-face behavior of  Jesse the treasurer (See “High Five” blog post) in demanding that a meeting with church leadership take place BEFORE we left for Virginia that year (2017), I decided that the best way to communicate with all involved was by expressing in writing what the Scripture actually says concerning men who pastor (or, shepherd) God’s people.  This was done instead of an in-person meeting with the church hierarchy, especially to avoid potential “gotcha” questions/accusations as I had previously experienced in meetings with the pastor at various times:

After months of trying to find out the details of what took place at a business meeting concerning us and our ministry, I finally received this letter from the pastor… 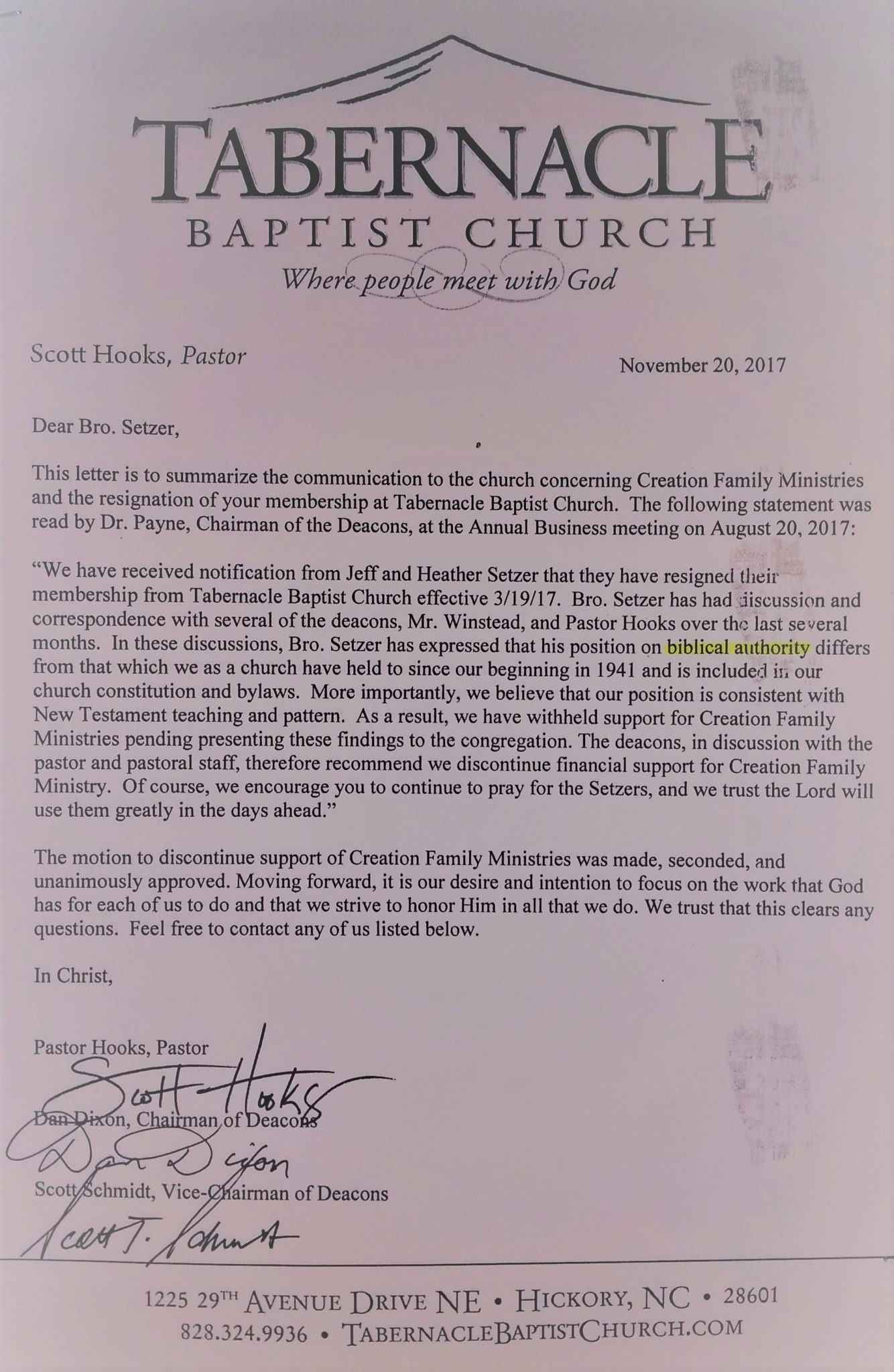 From reading the above letter, you can see the words “his position on biblical authority.”  I can forthrightly and honestly say that the subject of Biblical authority was NEVER discussed.  Actually, the deacons and Scott Hooks wanted to meet with me and discuss “what I believe about a pastor.”  In the statement that Dr. Payne read in the business meeting during which some friends told us that we were railroaded, they deceptively changed the wording to “biblical authority.”  This wording took the focus off of the actual subject of the pastor and placed it on us and our differences with church belief.

SIDE NOTE:  In re-reading the above letter. I notice the reference to having “withheld support pending presenting these findings to the congregation.”  NOT ONE PERSON had let us know that the church was discontinuing financial support!  It just stopped without notice.  However, an intriguing situation happened one day, when the treasurer Jesse Winstead strangely called me into the school principal’s office, which was not ‘his’ office.  He along with Frank Ridley (why, I don’t know), my high school basketball coach, informed me know that we needed to find a mission board, referencing IRS regulations for mission boards as the reason.  However, the church had served as our mission agency for nearly 20 years with no issue.  Why now?  As it happened, Tabernacle was gaining more and more ties to Temple Baptist in Powell, TN.  Hooks spoke of Temple’s pastor Clarence Sexton as “his pastor,” and more and more “Crownies” were being brought in to replace school teachers who had been serving in the school for many years.  In addition, someone had brought in a financial advisor from Temple in Powell to “advise” Tabernacle.  (In my opinion, Jesse accidentally mentioned that the lady financial advisor was out of the church in Powell.)   Looking back, I understand more fully that Hooks was not up to telling me directly.  He needed to have the treasurer use the IRS as an excuse to start the official process of pushing us out.

Aside from conversations with Hooks (detailed in previous posts), I first began discussing “confidentially” our concerns about the direction of the church with Dr. Dennis Payne during breakfast at Bob Evans restaurant in Hickory.   At the time, I thought he as a doctor was a friend in whom I could trust, and he had been head of the deacon board.  Both he and one of the above signers, Dan Dixon, had been our Sunday school teachers.  If you can’t trust your Sunday school teacher, who can you trust?? 🙂  The other signer, Scott Schmidt, was a long time friend of our family, as he is the son-in-law of the previous pastor, Phil Vos, who was pastor of the church Heather and her parents attended back when they lived in TN.  Heather and I even attended Scott and Casie’s wedding, so our friendship goes quite a ways back.  We still count them good friends.  It is intriguing that not ONCE in all of the dialogue did we EVER hear from either Scott or Dan expressing any Christian concern of prayer or love.  It is extremely sad that it takes situations like this to expose who your real friends are (or in this case aren’t)!  In short, we were slowly and gradually railroaded out of Tabernacle, our home church for more than 20 years!

Hooks came to the church from Crown College, after (as I understand) having earned a degree in business from the University of TN at Knoxville and after serving 8 years as assistant to Clarence Sexton at Temple Baptist of Powell, TN.  Over time, it became clear that Hooks was seeking to replace all of the church and school staff and missionaries with folk who have an allegiance to Crown, or a “bow to the pastor” philosophy such as that of Hyles-Anderson College.  It is therefore no surprise that folk in the church or school ministry who had served many years in their roles were simply and unexpectedly ousted by this CEO/lording “pastor.”

It is tragic and amazing to us the political wrangling like this that can and does go on in churches, Bible colleges, or even mission boards!