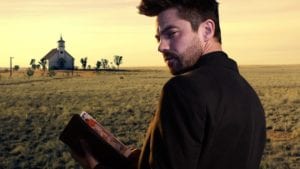 In our last FBI Bible study group session, we looked at 2 Timothy 2:16 and one of the warning texts where Paul instructed one of his spiritual sons, Timothy:  “But shun profane and vain babblings…”  In breaking down the word “profane,” we saw that it means to “walk over a boundary or threshold in violation.”

Yesterday, April 14, 2019, a pastor in our home area was sermonizing at the church my family attended when my brother and I were growing up, where we also trusted Christ as our Savior.  After church, we were eating out with our family when my brother told us that he and my sister-in-law had visited that same church, and he mentioned something that the pastor had said during a message on the Triumphant Entry of Christ (this being the week of Resurrection Sunday).

In referring to the “ass” that is mentioned a few times in the early part of Matthew 21, the pastor seemed to think that it would be useful to make a little joke on a word that is used many times in Scripture for a donkey, but that is commonly thought of and used today as profanity, crude, or at the very least a crass word.  Specifically, he said, “I know some of your wives are sitting beside your a**” and “my wife has one too.”  What’s worse, according to my brother, there was quite a bit of laughter in the audience at the “joke.”

I can’t say that I was totally shocked.  Is this the common depth of our pulpits?  Can we not stick to expounding what the Creator of all has for us today from His Revelation to mankind, rather than thinking we have to resort to crude jokes?  People need to hear what “thus saith the LORD,” not some petty, wannabe comedian!  This type of thing is a shame and disgrace, not only on the pulpit, but also on a number of the congregation who apparently enjoyed the joke.  Not everyone did, though, for my brother and sister-in-law were not amused, and I was mildly shocked to hear about it.

What America and the world needs are pastors who will stand up and speak up the Word of the Living God without fear of man, and who lovingly and humbly serve as shepherds of the people of God!  We desperately need to oust the charlatans who are playin’ at ministry and wait on the LORD for men who are serious about serving the Creator in “meekness and fear” (1 Peter 3:15) using their God-given gifts.  May God help us, and may HE provide such men.  At the very least, we must do as Paul instructed Timothy:  to “shun” such “profane and vain babblings” (or, empty words) and to “rightly divide the word of truth” (2 Timothy 2:15).