“Whether therefore ye eat, or drink, or whatsoever ye do, do all to the glory of God.”  1 Corinthians 10:31

Recently, I have been contemplating a text I received from a pastor which referred to our “diet talk”  the last meeting we had at his church. This was one text in a series of texts about why he said he’d never again have me come to speak in his church. 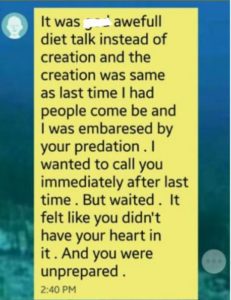 On the one hand, the wording he used was offensive and his criticism offered no specifics, so I do not take it seriously.  In addition, his spelling was atrocious!  Plus, I have videos that the church shared with me from the previous time I spoke, and he flat out LIED when he said they were the “same as last time.”  The theme was totally different!  On the other hand, I wondered, “Why such feedback?”  “Should I avoid such discussion, or is there Biblical justification for discussing health matters as it relates to what we eat?”

Attending a Christian school from 7th – 12th grades brought about the beginning of my spiritual growth, particularly since there was little Bible teaching in the church my family attended during those years.  A big part of that growth stemmed from a camp the school attended annually called “The Wilds.”  I shall forever be grateful for the impact that place has had on my life!  If anyone reading this post has ever been there, you know that one thing they do before every meal (besides pray) is quote 1 Corinthians 10:31.

In that verse is referenced the most basic activities of our lives, eating and drinking…not walking, sitting, standing, or a host of other actions that we do every day.  Since around 1995 when we first began to learn of natural helps in God’s creation, we have been on a pathway of education from various sources concerning many things that God has created for our benefit.  For over 25 years, our naturopath “Dr Brenda” has been our main source of information about things that we can put in or on our bodies, or what to avoid, that has helped us and continues to help us.  Should we just avoid sharing that information?  I think not.  The more we learn that helps us, the more we want to help others!

What’s more, as we see issues like COVID-19 bringing about such devastation and fear in our nation and around the world, we are seeing the need of the hour is to address matters concerning health…which includes diet.  Such issues are greatly affecting assemblies of believers, as church attendance has declined both due to fear and poor health.  Not only that, pastors are dying!

What to do?  Though the pastor referenced earlier used the terminology “____aweful diet talk,” I can honestly say that he’s way off base and needs to take a step back and look at the big picture.  Pretty much every congregation around the country has taken steps such as cutting back the number of weekly meetings or implementing extra efforts to sterilize buildings, etc.  Many have opted instead to stay at home and watch services/messages online, which reduces the regular assembly attendance numbers, which often affects the church offerings.

So…”_____ aweful diet talk”?  Really?  We absolutely cannot afford to plunge our proverbial “heads in the sand” and ignore this one.  COVID is affecting the modern church.  I say “modern” because it is a far cry from Biblical Christianity which is another subject for another time.  Suffice to say, this virus is accomplishing some semblance of the church in Acts that consisted in large part of believers meeting “house to house.” If church assemblies and their pastors truly wish to recover from the devastation of COVID, they will begin to take seriously what God had already instructed in His Word concerning what to put / what not to put in our bodies.

“And at the end of ten days their countenances appeared fairer and fatter in flesh than all the children which did eat the portion of the king’s meat.”  Daniel 1:15